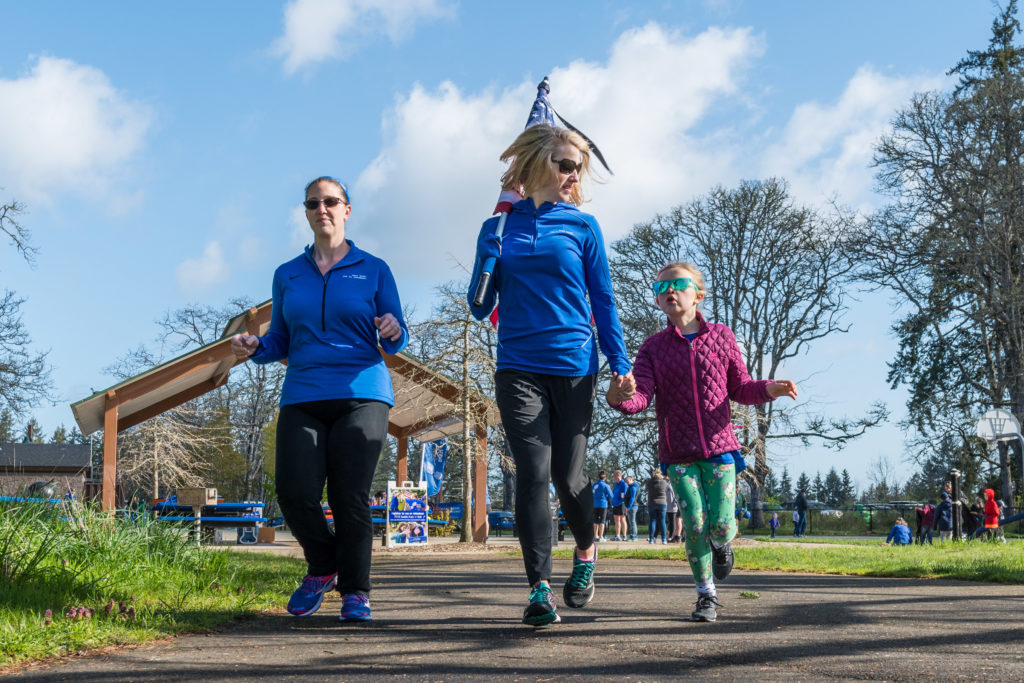 I am the Executive Director of wear blue: run to remember and, more importantly, a proud Army wife. I grew up with my husband, John, in Northern California. We attended the same small Catholic elementary school, and over the years, built a strong friendship. On December 27, 2003, I married Captain John Hallett, a West Point graduate, and together we embarked on an amazing journey as a military family. On the way, we were blessed with three healthy, happy children: Jackson, Bryce, and Heidi.

John was an inspiring leader with a tireless work ethic. He cared passionately for both his soldiers and his family. He took command of a Stryker infantry company in November, 2008, and the following summer deployed with his brigade to southern Afghanistan.

With Heidi at my side, I sat down, ready for the meeting, when I felt a tap at my shoulder. I looked over and saw the Rear Detachment Commander, Frankie. I remember smiling and saying hello, but he brushed aside my greetings and instructed me to come with him. I scooped up my papers and the baby and we walked across a large field to the battalion classroom. I kept demanding an answer.

Two men in the Army’s formal military uniform waited for me in the classroom. The gentleman on the right held a white piece of paper and began to read, “The secretary of defense regrets to inform you that your husband, Captain John L. Hallett, is believed to have perished in the fires…” I stopped listening. I had a three-year-old, a one-year-old, and a baby whom my husband had never met. They had to be wrong.

But they weren’t wrong. John was killed on August 25, 2009, with three other brave soldiers on his way home from a goodwill mission delivering medicine to a village with a cholera outbreak. For our brigade, it became a deployment that claimed 41 lives. Eventually, 14 more were lost to suicide, including Frankie.

I was broken. Trying to piece myself back together, I turned to the coping mechanism I had leaned on throughout John’s military career: running. It was a tangible accomplishment in a world that felt out of control. As I ran mile after mile, I slowly realized that as I was running from the pain life had offered my family. I was running to strength, hope, and confidence for the future.

Thankfully, I wasn’t alone. In the middle of my personal grief, I worked with fellow military spouse, Erin O’Connor, to form the national nonprofit wear blue: run to remember.

We didn’t start with a vision, just a need for community and healing. We leaned on what we knew, running, and began to gather with a group of military spouses. The first time the group ran together, we wore our husband’s blue PT shirts. We met up in a parking lot, unsure and awkward, then went for a run around the airfield.

We came together for weekly runs throughout the remainder of the deployment. As the unit came home from combat, we realized that they too needed the space to heal. We sought a place of understanding and common ground to build a new normal. Running with wear blue became that place.

wear blue: run to remember is now a national community that honors the service and sacrifice of the American military. We support the men and women still in uniform, honor and remember service members who have made the ultimate sacrifice, and empower families of the fallen.

Since my engagement with the Presidential Leadership Program, wear blue: run to remember has earned two large grants that have allowed the expansion of the program from our flagship chapter at Joint Base Lewis-McChord in Washington, to Fort Bragg, North Carolina, and San Antonio, Texas.

The tragedy our family faced was not one of chance. John chose to be in the military, well aware of the risks it carried. John’s gift of his life became his children’s sacrifice. John’s absence will cause Jackson, Bryce, and Heidi to walk with their own heartaches, but the complexity of their emotions and life experiences has the potential to mold them into extraordinary individuals.

But they cannot do this on their own. They need their community to stand in support. My desire to provide that community for them and other Gold Star Children is the driving force behind my PLS Personal Leadership Project: wear blue: run to remember’s Gold Star Youth Mentorship Program.

The Gold Star Youth Mentorship Program pairs children of fallen military with current members of our Armed Forces in a run-focused mentorship to build resilience, healthy coping mechanisms, and a connection to their identities as survivors and military children. Each pair joins the larger wear blue Saturday Run community for four months of runs, focusing on goal setting, training for a 5K, learning about life of service, and building a lifelong friendship.

Thousands of runners across the country run in blue every week. We have 50 running communities, 14 national races, and over 50,000 runners. Each of wear blue’s programs are centered on running to activate our abilities to be greater than our obstacles. Over the past 8 years, we have honored over 10,000 of our nation’s fallen military heroes, and impacted almost one million athletes as they have passed through our tribute displays.

The Presidential Leadership Scholars program has given voice and structure to our growing national mission. The incredible network, authentic support, and earnest lessons have enabled me to take my passion to the next level: creating a stable financial foundation, expanded programming, and a broader national reach. Because of PLS, wear blue is better equipped to support our military, their families, and the families of the fallen.

Surviving the loss of her husband, Captain John Hallett, killed in action on  August 25, 2009, Lisa Hallett turned to running. She started wear blue: run to remember, a gold star, veteran, and military support community that spans the globe. The support community empowers families of the fallen, supports the men and women who serve, and honors our nation’s fallen heroes.

Through the support of PLS, Lisa is currently scaling a Gold Star youth mentorship program, empowering post-9/11 Gold Star children in building resilience and identity through a run-focused mentorship with currently serving members of our armed forces. Hallett is dedicated to developing healthy communities that honor the fallen, support the military, and bridge our military and civilian populations as our nation navigates its longest war.