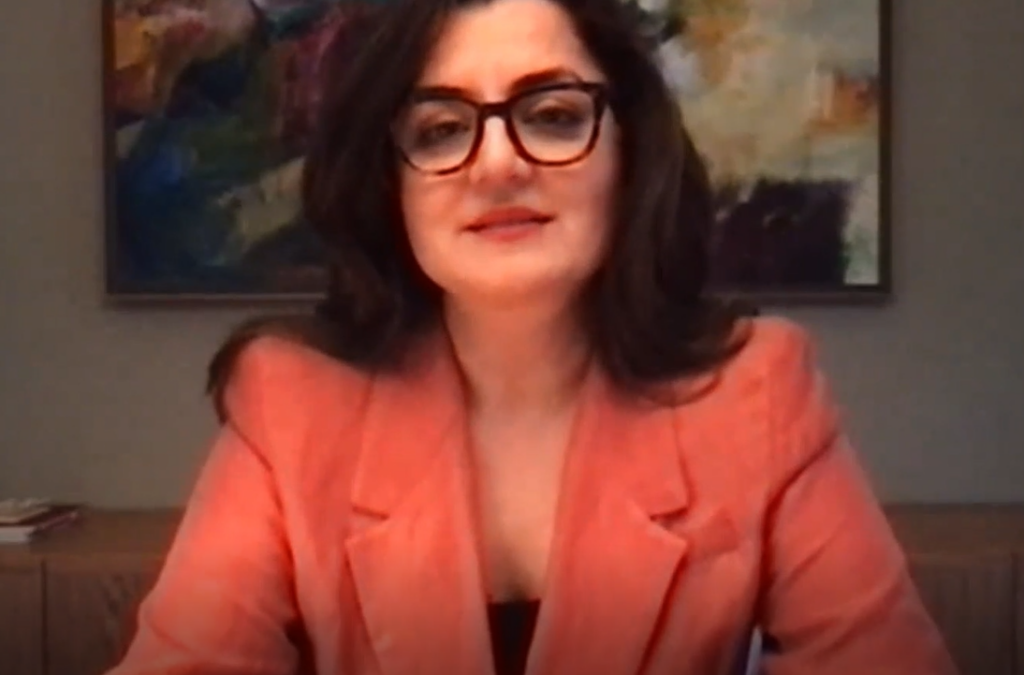 As a seven-year-old, Mariam Memarsadeghi saw the life her parents built shatter around her during the Iranian Revolution of 1979. While her family had no intention of leaving their home country, it was clear to Memarsadeghi’s parents that their daughter could no longer have the life they had hoped for her in Iran’s new state of economic and social ruin.

The family left for the United States that year as violence in Iran intensified. They resettled in a small, rural town in Maryland where they were welcomed by their new neighbors and started on the path to earn a green card. Eleven years after arriving in Maryland, the family took the oath of U.S. citizenship and Memarsadeghi left for college – two opportunities they had dreamt of when they fled their home years ago.

Memarsadeghi has dedicated her life and career to advocating for democracy in Iran. In 2010, she started Tavaana E-Learning Institute for Iranian Civil Society, a civic education and civil society capacity building initiative with a vision for a free and open society in Iran. Memarsadeghi most recently founded the Cyrus Forum, which aids peaceful, durable transition to democracy in Iran through a multi-stakeholder, collaborative process.

Learn more about Mariam Memarsadeghi’s immigrant experience and advocacy for democracy in Iran in Out of Many, One: Portraits of America’s Immigrants by President George W. Bush, and read the below Q&A with Memarsadeghi regarding Iran’s crackdown on women’s rights protesters and the death of Mahsa Amini.

Tell us about your work at the Cyrus Forum and its mission to aid the peaceful, durable transition to democracy in Iran.

We started Cyrus Forum just before the Iran Revolution – this nationwide uprising – began. Less than a month before the gruesome killing of Mahsa Amini, Cyrus Forum was launched, and it’s something that I wanted to do really always. I have been working for A Democratic Iran for many years now, and I’ve always felt a certain lack of preparedness for the day after transition, or the day after transition begins really towards democracy. So a lot of focus is on getting to the point of regime change, and I’ve worked on that myself, co-founded and co-directed a project called Tavaana, which is focused on civic education and civil society capacity building. But the Cyrus Forum is really about what we need to do and be prepared to do on day one after this totalitarian regime is gone and we begin the very hard work of building a democratic government.

There are protests taking place in Iran and across the globe following the horrific arrest and death of Mahsa Amini. What is your reaction to the men and women risking their lives to protest this atrocity?

Well, for a lot of people this was a long time coming… for people who have been really immersed in the struggles for human rights, for democracy, who are close to political prisoners who know about the pain and anguish of families who’ve had their loved ones killed by this regime. There was no doubt in our hearts, nor in our minds that people in Iran deeply detest this regime. I know that President Bush understood this, felt it in his bones, that no people ever wants to be oppressed. And the Iranian people have been suffering under an Islamo-Marxist totalitarian regime, very ideological, extremely repressive for 43 years. And in my opinion, for 43 years they have not been satisfied with their lives, with their lack of freedoms, with anything about this regime. But they tried different things. During the nineties, they tried, for example, through President Khatami government-led reform. It went nowhere.

During the green movement, again, some tried backing so-called reformist candidates. Again, that went nowhere. And it’s really fair to say that Iranians of all worldviews, lifestyles, political pasts are confronted with a basic truth. And that is that this regime can never be one that delivers. It’s not just that it can’t deliver freedom; it can’t deliver anything that a human needs. It can’t deliver water, it can’t deliver clean air, and it can’t deliver an economy so that people can put food on the table. Even the most educated Iranians can’t feed their families. It can’t protect the environment in a way that 10 years or 20 years down the line, we can be sure that there is even a country there. So in all ways, there is deep incompetence, deep corruption, and an inability to meet the needs of the Iranian people.

What would you like people to know about Iranians—especially the women in Iran?

I would like the American people and people in the world to know that the Iranian people you see on the streets, the girls, the women, the men who are standing strong behind them are no different from the girls and the women in your lives. They have ambitions, they have desires, they have hopes, and they know that they can’t achieve any of them so long as a brutal totalitarian regime rules over them.

Leaders from all over the world have made public statements condemning the death of Amani and supporting the protests. What can the international community do to continue to show support?

It’s important for the West to signal in no uncertain terms that it will not continue to talk and be diplomatic with the regime that is harming its people in such a fundamental way. And as importantly, at a time when the Iranian people are showing such courage and capacity and determination, the United States and all democracies in the world need to see the revolution of the Iranian people as a tremendous opportunity, not just for the people of Iran, but for peace in the Middle East, for global security, for a real blow to Islamic terrorism.

What is your hope for the future of women’s rights and freedoms in Iran?

Well, as somebody who grew up in the United States since I was seven years old and benefited from all of the wonderful opportunities public school education provided me: Title IX athletics, learning right alongside boys, all kinds of economic opportunities to grow, I want the same thing for my Iranian compatriots, particularly the girls and women back home in Iran. I want them to be no different, treated no differently than boys, to dress as they choose.

Right now, little girls when they go to kindergarten or first grade have to have a very tight hijab on their head all day long. I want them to be free of that. I want them to be able to study anything they want, work in any field that they want, the sky to be the limit for them. And I think if we get there, it’s really all of society that benefits not just girls and women. And I’m so proud that Iranian men and young boys really are out on the streets with slogans and support of Mahsa and women’s rights because they know that a regime that denies girls and women their rights is a regime that isn’t going to allow any freedom.