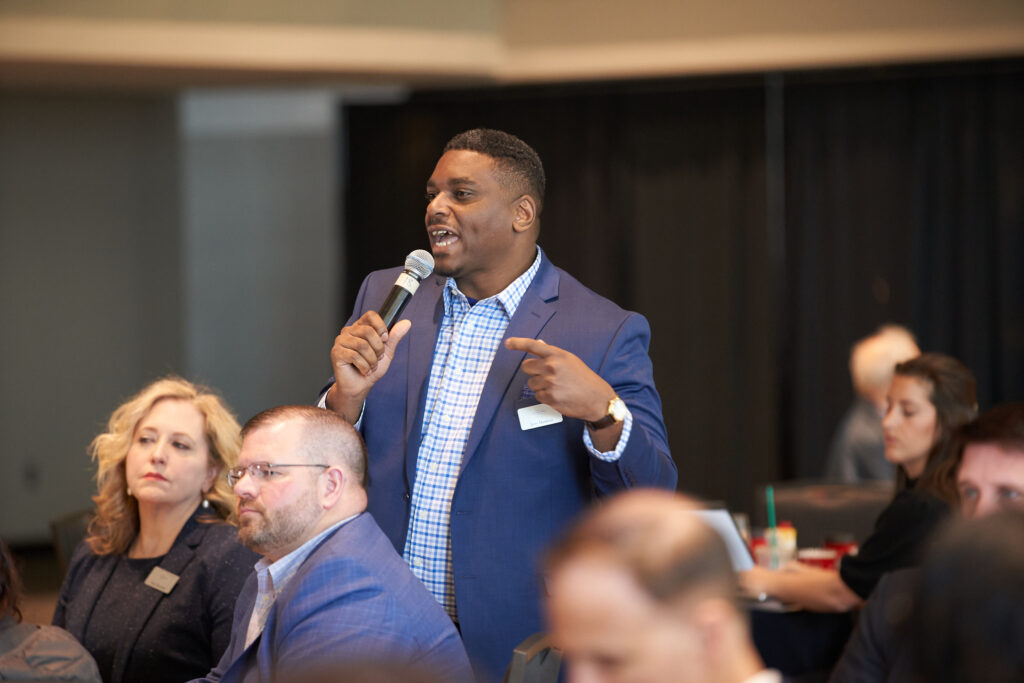 In celebration of Black History Month, we spoke with Presidential Leadership Scholar Jerry Hawkins (2020), the Executive Director of Dallas Truth, Racial Healing & Transformation (DTRHT). Jerry gives an update on his PLP, Young Leaders Strong City, reflects on what Black History Month means to him, and shares who has influenced his life and work.

Can you tell us about your role at Young Leaders Strong City (YLSC) and the program’s impact?

So my PLP, Young Leaders, Strong City, started off as a small fledgling idea from three women when Dallas Faces Race, a collaboration between the Boone Family Foundation and The Embrey Family Foundation brought Race Forward, which is one of the nations leading racial justice organizations to Dallas to have the Facing Race Conference, which is the largest racial justice conference in the country. There was no space for youth to have learnings at this conference, it was mostly adults. So these three women created a Young Leader, Strong City, for youth to have a voice in this conference. They continued having a summit for youth every year out of their pockets and asked me to join in and helped them grow that program. We actually grew it with UTD and took it on as a separate project ourselves.

Young Leaders, Strong City, is a organization that helps youth realize their power in their communities, advocate for change in their schools, and also organize for the world that they want.

It’s a really cool program, but it also is now independent. Since 2020, we have grown. We have hired a executive director and I’m now on the board, so really excited about it.

What motivates you to do this work?

So what motivates me? I think one, we all deserve to live in a world that we can feel free, that we can have joy, that we can live and grow together; we don’t have to worry about where we are or who we are, and why are we there. I think that because of some of the intentional decisions of policy makers in the past requires a little work on all of our parts; some a lot, right? And so I am inspired in that I see a world where that can exist.

What does Black History Month mean to you?

Black History Month means everything to me. It was founded in Chicago where I’m from. Carter G Woodson started off this platform for Black people to learn about their history, because it was erased from the general American history.

In the Wabash Y where actually I had my first membership of any kind as an adult in Chicago on the south side, Negro History Week was started and that week became a month, And that month became Black History Month.

It allows us to kind of recalibrate what the contributions of Black people to the United States are, but also it’s just American history that we all need to learn and continue to build that foundation for us to grow together, and I think that’s what Black History Month does.

Can you tell us about the people who have influenced you?

Oh, for sure. So many people. I’ll say, Mother Thelma Meyers and Brother Martin from my Roosevelt University Upward Bound Program. They taught me how to write. They gave me confidence. They gave me self-esteem in who I am and really allowed me to grow as a young reader; they gave me all of these books. Obviously my mother and my father, and my grandparents. My kids really inspire me now. I have three kids, and they’re amazing humans, and they challenge me every day.

And then my friends and family, I would say I have a great group of friends. We research together. We talk about these hard problems, and even my PLS friends. So I’m really inspired by folks like Charles Drew, who was also part of my fraternity, Omega Psi Phi fraternity incorporated. He perfected the use of blood plasma and started what became the Red Cross, even though he couldn’t get a blood transfusion because he was a Black man. Amazing people like that.