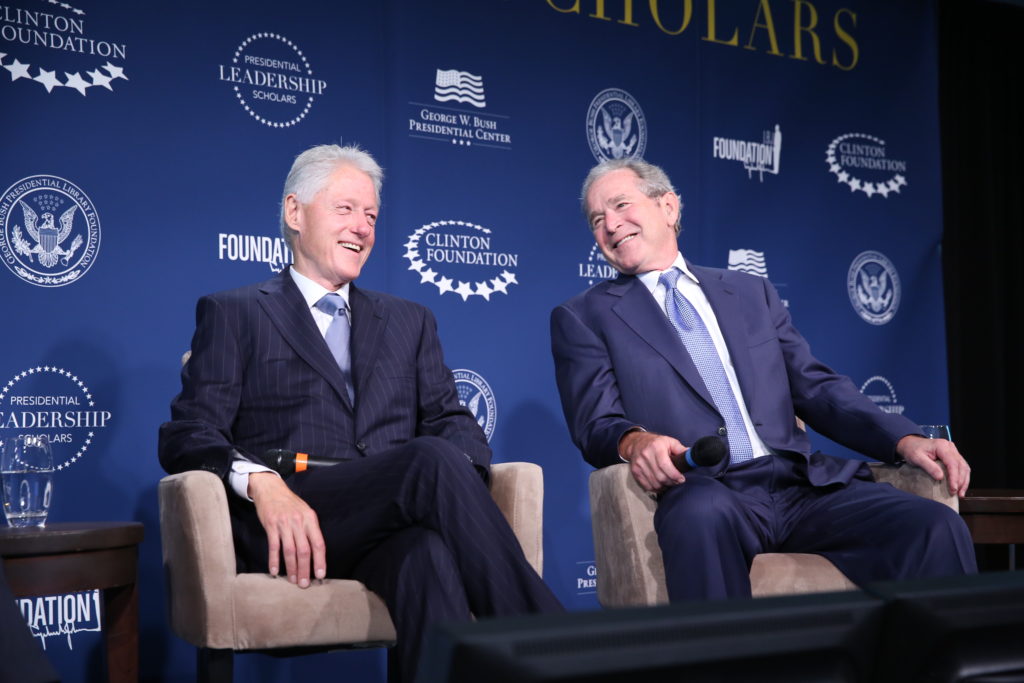 I asked two former presidents how they accomplished big things. Their answers surprised me.

What makes a great leader? I used to think I knew.

And then I met Presidents Bill Clinton and George W. Bush.

On the face of it, the former presidents appear quite dissimilar: they’re from different parties and their administrations often espoused contradictory policies. Yet, both were able to institute bold initiatives to help those less fortunate. And they did it, they say, by putting aside their differences with others in order to achieve common goals.

At a panel discussion I was involved in at this year’s graduation, the two men discussed leadership and critical issues facing our nation. President Clinton told the graduating class a story about attending a dinner when he was the governor of Arkansas with then-President George H.W. Bush. During the dinner, Hillary Clinton brought up the nation’s high infant mortality rate and her desire to reduce it. The elder President Bush didn’t believe the numbers, says President Clinton. Mrs. Clinton offered to send him the data, but he said he’d get it himself.

True to his word, the next day President Bush handed Hillary Clinton a note. “Hillary,” it read, “I checked the figures. You were right. I was wrong. What can we do about this?”

Bush would go on to create the interagency White House Task Force to Reduce Infant Mortality and the Healthy Start program, with a goal to reduce infant mortality by 50% in five years.

Subsequently, President and Mrs. Clinton picked up the work begun by President Bush. Collaborating with such unlikely allies as Democratic Senator Ted Kennedy and Republican Senator Orrin Hatch, they created the State Children’s Health Insurance Program — the largest expansion of publicly-funded health insurance coverage for children since the establishment of Medicaid in 1965.

Similarly, after he took office, George W. Bush surprised many of his critics when he committed funds to the Mother and Child HIV Prevention Initiative in an effort to save the lives of 150,000 babies in Africa. And then, breaking with the orthodoxy of many in his own party, Bush worked with congressional leaders of all stripes to pass the President’s Emergency Plan for AIDS Relief, or PEPFAR — a multi-billion dollar program that one analysis found reduced HIV/AIDS by 28 percent, saving 1.1 million lives in its first three years.

The examples set by these men have inspired many of us to champion initiatives based on shared values. Recently, the Clinton Foundation, working with the George W. Bush Institute, convened a panel of PLS alumni to explore opportunities to address America’s opioid crisis. Needless to say, my fellow panelists and I come from diverse backgrounds, represent a host of political views and have very strong opinions about the best way to address the crisis.

Which is precisely the point. The only way we’ll make progress toward ending the opioid epidemic is by pushing one another to dance through the edge of discomfort so that we can find the common ground that will allow us to overcome our differences, challenge the status quo, and work toward a common goal.

“While men inhabiting different parts of this vast continent cannot be expected to hold the same opinions, they can unite in a common objective and sustain common principles,” said Franklin Pierce, our nation’s fourteenth president. I hope this Presidents week, you’ll join me in celebrating the presidents who dreamt big and achieved big things by uniting in common objectives and sustaining common principles. Because that’s when the most productive partnerships emerge – even among the most unlikely of partners.

Of the approximately 40 million people living with HIV, almost 25 million dwell in Africa.  Even with these high numbers, life-saving HIV treatments remain scarce across a majority of the continent.  To improve the nation’s efforts, Jay Bhatt trains, supports, and empowers community-based lay health workers, especially those currently suffering from the illness.  During his time in the program, Jay has continued to provide assistance to health workers by ensuring all are paid sufficient wages, continuing to educate and train on new protocols, and adequately staffing aid clinics to better treat referrals specifically from the front-line lay health providers.